In solidarity we publish the transnational call of #6FCeuta 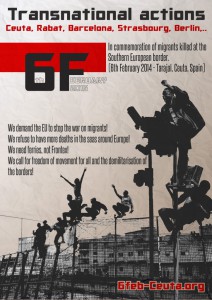 Perspectives on struggle and solidarity

Hello to everybody, to all migrants from the South, North, East and West.
Together we need to lead a discussion on how to find perspectives and change the situation for migrants. Because this situation doesn’t just concern us or you: it concerns everyone.

The barriers between Melilla and Ceuta: How many millions of Euros are invested every year in these barriers? 1 metre, 3 metres, 6 metres of fencing. The militarisation policy has never been successful. There have always been migrant movements and attempts to cross to the two Spanish enclaves. The current example of Hungary greatly reminds us of this with its vast flow of migrants undeterred by the same policy of militarisation. Whether we are Africans, Europeans or from elsewhere, it is up to us to stop this machine which criminalises and kills human beings at every one of Europe’s borders. Europe has happily opened its borders to all the world’s wealth, in particular that of Africa (uranium, coltan, coffee, coacoa, petrol, gas, gold, diamonds, etc.), in total complicity with dictators which it supports and who are also responsible for this policy. Europe continues to incite and nurture conflicts and wars all over the world (Ivory Coast, Sudan, Central Africa, Congo, Libya through NATO, Iraq, Afghanistan and most recently in Syria, etc.). And the capitalist system further accentuates this EU policy which shows contempt for all human values. We can quote the writer Fatou Diome here who, on French television in April 2015, said ‘Those people who die on the beaches (…) and if they were White the whole world would be trembling. (…) When the poor come to you, it’s a crush movement which has to be blocked, but when you with your passport and all the arrogance what that brings, you disembark in the third world and you are on conquered land. So you see the poor who move but you do not see the rich who invest in our countries. (…) We must end this hypocrisy: We will be rich together or we will all drown together.’

The 6th February remains a day to remember for us, to remind the European Union, who loves to preach democracy and respect for human rights, what happened that day:
On the 6th February 2014, at least 15 people were cruelly killed by the Spanish Guardia Civil, as more than 500 migrants tried to cross the enclosures of Ceuta, the Spanish enclave situated on African soil. During this attack, the Guardia Civil shot rubber bullets at random at people in the water. Due to the bullets and the tear gas, some of those people lost consciousness and drowned in the waters off Tarajal Beach.

The EU continues to kill with more consciousness every day. Compared to some years ago even the mass media documented the terrible happenings at the borders and in the Mediterranean sea. Till November 2015, 3500 more deaths have already been counted in the Mediterranean sea since the beginning of the year. Our friends who stay in Morocco regularly witness the disappearance of zodiacs which leave and never come back. Many of them are not even part of the statistics on deaths and disappeared. Working with the Alarm Phone, we have come to realise the drama of the situation of migrants on the high seas. But we also get to know more and more members of the civil society who are not willing to accept this murderous reality, produced by the EU politics.

The EU policies trying to reinforce the borders are not a way of stopping smugglers. These policies themselves produce an underground economy, criminalise and endanger people. Migrants seeking a better life are beaten up on the borders of Europe and drown in the sea because the EU refuses to open safe and legal migration paths.
We are from Cameroon, Syria, Mali, Eritrea, Senegal, Spain, Germany, Tunisia, Morocco and more countries. We don´t accept any more deaths in the Mediterranean. We are activists from collectives, associations, initiatives and various social movements. We fight for freedom of movement for all! We know it is possible to ‘live together’ and to consider a political system of equality and respect for human rights, because we have been building solidarity networks for years. We feel great solidarity with what is happening in Morocco, Libya, Tunisia, Turkey, Greece and the current enormous movement in Hungary, Serbia and Croatia.

We demand the EU to stop the war on migrants!
We refuse to have more deaths in the seas around Europe!
We need ferries, not Frontex!
We call for freedom of movement for all and the demilitarisation of the borders!

For the 6th of February 2016, we appeal for a mobilisation and decentralised actions in different countries to strengthen local struggles, but also to send transnational messages to the whole world.

The mobilisation to Rabat in Morocco is organised by sub-Saharan and Moroccan associations as well as activists and Human Rights initiatives in different Moroccan cities, such as the Conseil des Migrants, Africa Light, Alecma and AMDH.
A demonstration in Ceuta is planned by Spanish activists and organisations like Podemos Migraciones, Digmun, APDHA and Pedagogia Ciudadana.
The Espacio del Inmigrante and other collectives are planning protests in Barcelona.
In Berlin afrique-europe-interact will organize an actionday and in Strasbourg is a mobilisation going on, too.

We invite you to organise actions on the 6th February 2016 in your place or to join a mobilisation in your region so that we can raise a strong NO to the EU’s border policy.

We won´t accept more deaths due to European immigration policies! Together we want to put pressure on the authorities to seek justice and create a community based on solidarity and the freedom of movement for all.

«Stop the war on migrants»
«No world without migration»

Perspectives on struggle and solidarity.24.12.2015